BRINGING THE PRAIRIE TO THE CITY

That contained geometry and efficient scale would inform future stylistic directions in Wright’s work, making Emil Bach House an important link between Wright’s Prairie period and the architectural innovations that would follow in decades to come.

A 100-YEAR JOURNEY FROM PRIVATE HOME TO PEERLESS TREASURE

In 1909, Frank Lloyd Wright was commissioned to design a home in what was then a lightly settled lakefront area north of Chicago and south of Evanston, IL — an area now known as Rogers Park. Three years after it was built, a man named Otto Bach purchased the house from its original owners, the Steffens family. Otto’s brother, Emil, admired the house — so much, in fact, that he commissioned his own Wright home to be designed and built nearby. The Emil Bach House was completed in 1915.

The house was situated on the north lot line, which provided southern sun exposure as well as maximum distance and privacy for the Bach family from the existing home to the south.

Working in the brickyard with his four brothers, Emil Bach had breathing problems, which, according to his grandson, Owen, he treated by walking down his back porch to swim in the lake every day. At the time of construction, there were no structures between the house and the lake.

The Farcroft Apartments, built in 1928, provide a backdrop for the house and along with other apartment buildings to the east, create a barrier to the full lake view once enjoyed here. While the fresh lake breezes continue, there is just a sliver of lake view from the house. At the same time, the purchase of the lot next door has allowed the current owner to provide lush landscaping and patio space, continuing one of Wright’s values which was bringing the “outside into the home”. His view was to incorporate the home into nature, and the current property accomplishes this beautifully.

The house remained substantially unchanged through the next 20 years. Photographs taken in the mid-1940s by Gilman Lane show that the only significant exterior changes that were made to the structure were the enclosure of the porch off the south-facing bedroom and an addition of a shed off the rear service entrance.

James F. Blinder bought the Bach House in June of 1959 and decided to undertake a full-scale “restoration” of the residence. The Historic American Building Survey (HABS) study of the house done in the spring of 1966 documents some of the exterior changes made by Blinder — analysis of historic photographs gives us more.

Removal of the cypress wood trellis around the ground level planter at the front of the house.

Replacement of the ramp from street level to the north service entrance door with concrete stairs.

Replacement of the concrete caps on the service entry wall and east entry garden retaining wall.

Replacement of over 60% of existing exterior cypress trim with redwood.

Enclosing and adding roof to second floor sun terrace and changing window between terrace and maids room to a door.

Removal of all 2nd floor leaded glass windows and replacement by single pane or jalousie windows.

Removal and sale/donation of all six original art glass windows.

Elimination of the planting beds under living room windows and reducing the size of the south and west planting beds, covering all courtyard ground area with concrete.

Demolition and replacement of the upper half (wood and brick) design detail of the privacy wall in the courtyard.

The interior of the house has also undergone substantial changes through the years. Wright originally designed all the kitchen cabinetry, a massive dining table with chairs and tabourettes, bay window bench with flower box, hearth bench (with storage under the seat and book shelves facing the entryway), a built-in desk and bookshelves in the north bedroom, built-in clothes press and dressing table in the south bedroom, built-in closet in the maid’s room, built-in linen cupboard in the 2nd floor landing and a built-in dresser in the west bedroom. From correspondence between Wright and Emil Bach, mention is also made of two easy chairs, light fixtures, curtains, rugs and single beds upstairs. No photographs, drawings or detailed descriptions exist for these elements, so they are lost forever.

By the 1966 HABS study, the only built-in elements remaining were the bay window bench, clothes press and linen cupboard. Additionally, the partition wall and swinging door between the kitchen and dining room area had also been demolished. The study did not detail changes made to the basement of the house, so it is not possible to know when the coal room, heater room and storage room partitions were removed and when the door to the fruit cellar was moved and the rear storage room underneath the porch was excavated. 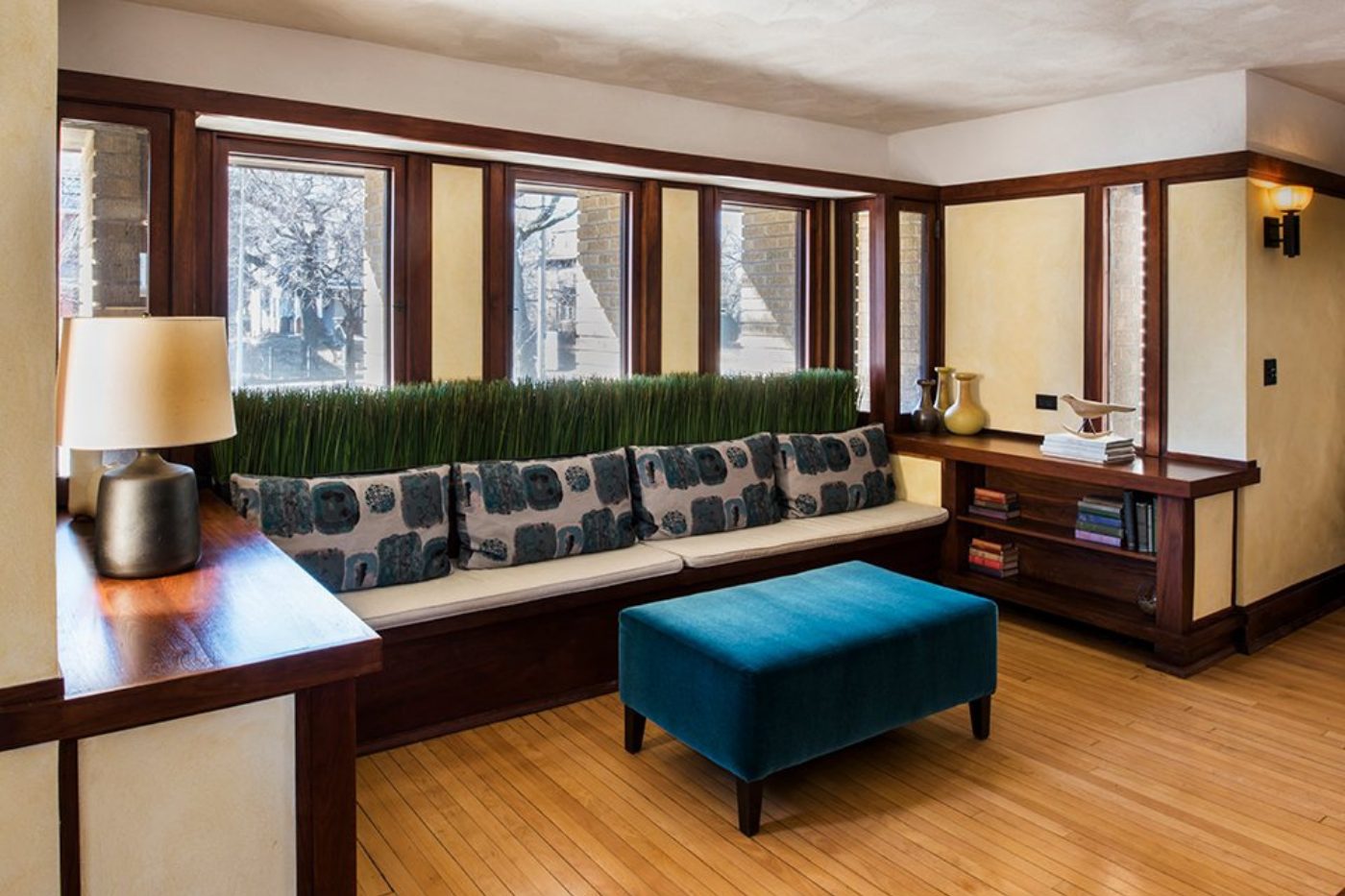